Tell us why you support DOT workers as first responders! 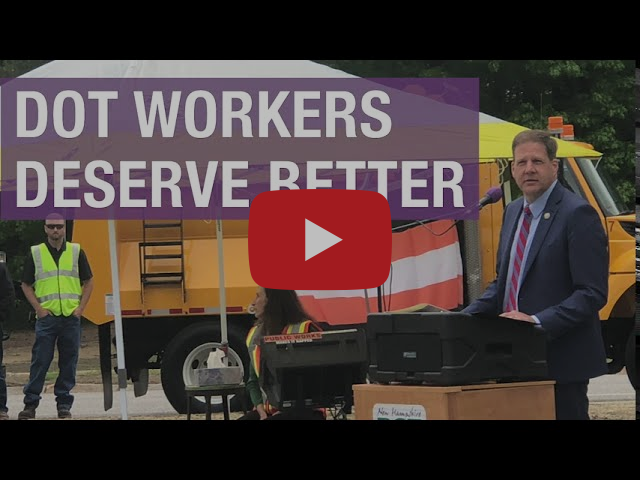 DOT workers respond to some of New Hampshire’s most pressing needs – snow removal, road repair, and much more. Before the pandemic, Gov. Sununu referred to DOT workers as first responders. Click on the image above to hear him clearly label them first responders. This year, he’s decided to leave them out of this category, costing each worker thousands in hazard pay. Now DOT workers need union members like you to express your support for them. To show your support for your fellow union members, post a comment of support on our Facebook page here. The more support they receive from the public, the harder it will be for Gov. Sununu to ignore them.

Since the COVID-19 pandemic began to wreak havoc in the US, Congress has been in conflict over relief packages for individuals, local communities, and businesses. The CARES Act, signed into law on March 27, 2020, helped many Americans, but so many others continue to struggle. In response, the US House passed a $3 trillion stimulus package -commonly referred to as the HEROES Act – on May 15.

Monday afternoon, Senate GOP members countered the HEROES Act with the HEALS Act, a package 1/3 of the size. Among other differences, the GOP package allocates only $200/week in unemployment benefits, while the HEROES Act provides $600/week in relief – a critical difference for struggling families. The HEALS Act gives no additional funding for local and state governments, while the HEROES Act allocates $1 trillion alone to local and state governments to keep essential workers employed and make up for lost revenues from tourism and decreased spending. The GOP plan gives tax cuts and liability protections to large businesses, and warns that helping unemployed Americans will somehow discourage people from returning to work after the pandemic.

More funding for state and local governments would be particularly helpful to Granite Staters. Gov. Sununu has stated a lack of funds as a reason to avoid many legislative priorities, including modest pay raises for state workers.

Pressure is mounting for Congress to pass a stimulus package before Congress enters recess on August 10. To voice your opinion, contact your Senators and urge them to keep families, workers, and local governments a top priority. SEA is in close contact with Senators Shaheen and Hassan and Representatives Kuster and Pappas regarding relief for workers and families throughout the COVID-19 pandemic.

In recent months, the Legislature has attempted to modernize the state voting system to allow for online voter registration, more time to process mail-in ballots, and no-excuse absentee voting. However, Governor Sununu was quick to veto the bill, citing new, extended provisions that allow New Hampshire voters to cast their ballots via mail in voting if they have concerns regarding COVID-19.

Election officials expect a drastic increase in mail-in ballots, with no more processing time than previous elections. Proponents of the bill say extra time to process mail-in ballots and allowing online voter registration are paramount to increasing voter turnout during the pandemic.

Every election cycle, SEA/SEIU Local 1984 endorses candidates that share our values and goals regarding NH workers and labor rights. We’ll be announcing endorsement regularly on our Facebook and Twitter pages, or you can view a list of endorsements here.

At the time of publication, the candidates listed below have received SEA/SEIU Local 1984’s endorsement. To learn more about them, click on their name and you will be sent to either their website or social media page if available.

*as of this publication

SEA/SEIU Local 1984 mourns the passing of Sylvia Gale, a longtime social justice advocate and former NH State Representative (2012-2014). Gale worked tirelessly on behalf of women and minorities and consistently defended working people. Among others, she was active with the Greater Nashua Area Branch of the NAACP, League of Women Voters, the Nashua Community Conservation on Race and Justice, and Nashua’s Cultural Connections Committee. Sylvia Gale was also a former SEA/SEIU Local 1984 member.

The New Hampshire Department of Education has launched its 5th Annual Backpack Drive and once again the members of SEA are going to pitch in and help! New backpacks can be dropped off at any time at the Department of Education, 101 Pleasant Street in Concord or drop it off Monday, August 17 from 12-2 p.m. at the SEA office. There will be a drop-off box available outside of the office in order to maintain social distancing efforts. More information can be found on our Facebook event.  As Diana Fenton, a DOE employee and creator of the drive explained: “New Hampshire families sometimes struggle with the out-of-pocket expenses of sending their kids back to school, and this is one way people can lend hand.”